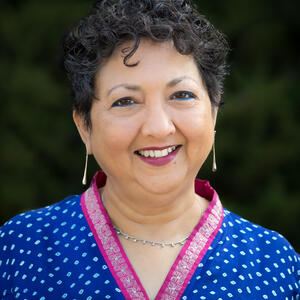 Dean Raka Ray began her term as dean of social sciences at UC Berkeley on January 1, 2020. Dean Ray is an award-winning mentor and teacher, and has previously held several leadership positions at UC Berkeley, including Chair of the Institute of South Asia Studies (2003-2012), Chair of the Department of Sociology (2012-2015), and Chair of the Academic Senate Committee on Budget and Interdepartmental Relations.

Ray is much in demand as a speaker on issues ranging from gender and feminist theory, postcolonial sociology, contemporary politics in the US and India, and her current project on the transformations in gender wrought by the decline of traditional fields of work for men. Ray’s publications include Fields of Protest: Women’s Movements in India (University of Minnesota, 1999; and in India, Kali for Women, 2000), Social Movements in India: Poverty, Power, and Politics, co-edited with Mary Katzenstein (Rowman and Littlefeld, 2005), Cultures of Servitude: Modernity, Domesticity and Class in India with Seemin Qayum (Stanford 2009), The Handbook of Gender (OUP, India 2011), Both Elite and Everyman: The Cultural Politics of the Indian Middle Classes, co-edited with Amita Baviskar (Routledge, 2011), The Social Life of Gender (Sage 2017) co-edited with Jennifer Carlson and Abigail Andrews, and many articles and op-eds.

Dean Ray earned a Bachelor’s degree from Bryn Mawr College (1985), and a Ph.D. from the University of Wisconsin-Madison (1993). She has been a Professor of Sociology and South and Southeast Asia Studies at the University of California, Berkeley since 1993.

Assistant to the the Dean, Randi Shussett

*Reports to the Vice-Chancellor for Research

Click here for information on how to give to Social Sciences