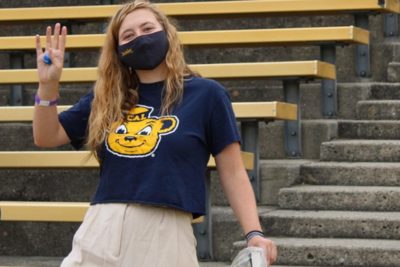 When Carson McNealy randomly chose a Cal sweatshirt her freshman year of high school as a new addition to her wardrobe, she had no idea of the journey she would eventually be embarking on as a UC Berkeley student four years later.

Finding a Major and Minor

“I’m in the Sleep psychology class with Professor Matthew Walker—I love that class so much—and we were talking about sleep deprivation and its effects on metabolism and food. I didn’t expect the correlation between those two in that class, and there was.”

Building a Community at UC Berkeley

Aside from her academics, McNealy is a member of the Cal women’s club water polo team, Food Association of Berkeley, rally committee, and she is a student ambassador. She joined the Cal water polo team because she had played water polo in high school year-round, and wanted to do the same at Berkeley. McNealy says that joining the team enabled her to form her own community through weekly practices, social events, tournaments, and travel. A newer addition to Carson’s extracurriculars includes the rally committee, which focuses on promoting school spirit, especially prior to game days.

One of McNealy’s accomplishments she prides herself on is her campus ambassador leadership role. As soon as she got to campus, she knew she wanted to be a tour guide for students interested in applying and attending Berkeley, so she applied for the fall semester. Since receiving the position, she’s given many tours of the Berkeley campus where she shares her insights on the university while simultaneously providing her own stories and experiences. “I really enjoy getting to share my experience with prospective students and I try to share some of the advice that I got,” says McNealy. One aspect of giving tours that she especially enjoys is talking about the misconceptions of Berkeley, such as the competitiveness of its students. “I was told, ‘Don’t go to Berkeley, people will sabotage you and purposefully tell you the wrong answers,’ but I’ve never experienced that and I don’t know anyone who’s ever experienced that.” With this, she shares a personal story about a first-time student at Berkeley thanking an organic chemistry class group chat that she was in, sharing that they wouldn’t have passed if it weren’t for everyone’s help.

McNealy also enjoys sharing fun facts about the campus, sharing stories and trivia that visitors may not know about UC Berkeley. “I love talking about the T. rex skeleton in the Valley Life Sciences Building, Osborn. It’s actually a cast that came to Berkeley in a giant box,” said McNealy. “Since there were no instructions on how to assemble it, it became a research project for professors, grad students, and undergrads. It was a great research opportunity.”

“I love Berkeley, so I love to talk about the campus and our fun facts—it’s my favorite thing to do.”

Being back on campus has also been a bright spot for McNealy this year. “This semester was good, I’m really glad to be back in person,” she said. Looking ahead to post-graduation, she is planning to work for a while to save money and gain work experience before applying to grad school. “Ideally, I’d like to work for a food company and eventually go into research about what works best for developing food...and how we can market our healthy products to encourage people to buy them. I’d like to focus on healthy foods - that would be my ideal goal after graduation.”

Try and get involved on campus. McNealy encourages current and future Cal students to be as involved as possible on campus to avoid feeling lost within the large student population. “It’s typical, but the most common complaint I hear is that people get lost on the campus. I think that it helps to build a support system, especially while you’re transitioning to college.”

Don’t be hard on yourself when it comes to viewing others. At times it may seem that everybody around you has their lives put together and they’re doing great with their lives perfectly set up, but it’s not true. “Everyone’s trying to work through it and figure it out—even the people you think know exactly what they’re doing and have everything planned, they really don’t,” said McNealy. “Everyone is kind of just faking it until they make it, so don’t be hard on yourself for that.”