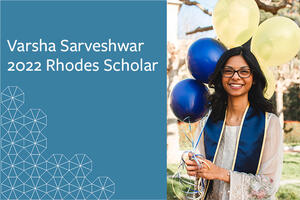 Varsha Sarveshwar '20, a UC Berkeley College of Letters & Science alumna, has received one of the world's most prestigious honors for academic excellence—the Rhodes Scholarship. The Scholarship is awarded “on the basis not only of intellect, but also of character, leadership and commitment to service,” and Sarveshwar was among 32 American students selected for this honor.

Sarveshwar recently graduated with a bachelor’s degree in political science, and minors in public policy and history. The Scholarship funds two to three years of post-bachelor study at Oxford University in Great Britain, and her future aspirations include pursuing two master’s degrees and becoming the best policymaker and public servant she can be.

More information about the Rhodes Scholarship and other Prestigious Scholarships is available on the UC Berkeley Scholarship Connection website.

What does this appointment mean to you?

It is an incredible honor. Honestly, I still can't believe it's happening!

I just want to become the best policymaker and public servant I can be, and so I'm hopeful that the experience of studying abroad — and alongside such a talented group of people — helps me get there. My political science education at UC Berkeley has been a great foundation thus far.

How did your experience as a Berkeley student prepare you to both apply for and be awarded this scholarship?

The heart of my application was my belief that we as progressive policy-makers are stronger when we are informed by both academic scholarship and real-world experience. That perspective was the result of my four years at UC Berkeley, where I was able to significantly broaden my horizons both inside and outside the classroom, as well as my work in the Governor's Office over the past year or so. Berkeley being so much more than an academic institution, I think, has been key to all this.

You may be pursuing the MSc in Comparative Social Policy and the Master's in Public Policy at Oxford. Do you have any future plans after Oxford?

I am not sure what courses I will definitely be pursuing — and, of course, I will have to apply for them and be accepted, which is never a guarantee. Generally speaking, though, I hope to pursue two master's degrees in the fields of political science, public policy, history, and/or law to deepen my own knowledge base. I do not know what I'll be doing after Oxford. Fortunately, that will not be until summer 2024, so I have quite a bit of time to figure it out!

Are there any personal moments or stories that stick out to you when you look back at both applying and receiving the scholarship?

Funnily enough, the Rhodes Scholarship was not even on my radar until May 2020 — which was the month I graduated from UC Berkeley! I was doing an informational interview with someone as I was trying to figure out where to work for my John Gardner Public Service Fellowship, and that person just so happened to say, "Hey, you should think about applying to Rhodes." That planted a seed, and I ended up applying the following year. I would not even have thought about applying had he not mentioned it to me way back then.

Are there any classes or professors that still stand out to you during your time at Berkeley?

Plenty! I'll shout out Professor Terri Bimes, Professor Eric Schickler, Dan Schnur, and Ted Lempert in the political science department and Dr. Sarah Gold McBride in the history department, who have been incredible teachers and mentors over the years. I also will forever be grateful to Dr. Bharathy Sankara Rajulu, my Tamil language teacher — not only was that the most fun I have ever had in a classroom, but it also helped me communicate and connect with my family in ways I was not able to before.

I have quite a bit of advice, which I am happy to share to anyone who reaches out. A few general things:

On a lighthearted note, how did it feel to become one of the thirty-two 2022 American Rhodes Scholars, and who did you tell first of your accomplishments?

It is overwhelming. It all goes by very fast. I was interviewed on the afternoon of Friday, November 19 and learned I won at about 6pm on Saturday, November 20. Right afterward, I asked the panelists on my selection committee when they would be releasing the list of winners publicly, and they said — to my surprise (and horror) — "Oh, in a few hours!"

I told my parents first and my grandmother second. Then I reached out to my closest friends, people who wrote me recommendation letters, and a few of my higher-ups in the Governor's Office. It was really important to me that, with everything going public so soon, they all heard the news from me. Once the news went public the next day and the day after, and my broader universe found out, my phone started blowing up.