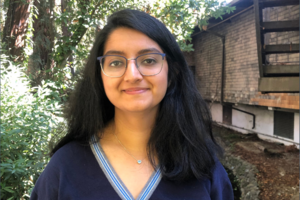 Tara Madhav, a first-year Ph.D. student studying history, was recently awarded the Raymond J. Cunningham Prize for her essay, "We Had to Do the Educating Ourselves."

The Raymond J. Cunningham Prize annually recognizes the best article published in a journal by an undergraduate student and awards the recipient with a $500 prize. Tara Madhav was awarded the 2022 prize for her essay "We Had to Do the Educating Ourselves," which explores the process of desegregation in East Palo Alto following the 1954 Brown v. Board of Education decision.

Below, Tara reflects on her achievement, her inspiration, and her journey in writing the essay. You can find Tara on Twitter @tara_madhav.

More information about the Raymond J. Cunningham Prize and other Prestigious Scholarships is available on the UC Berkeley Scholarship Connection website.

What is the Raymond J. Cunningham Prize and how does it feel to be the 2022 recipient?

The Raymond J. Cunningham Prize is an essay prize awarded by the American Historical Association to the best undergraduate article published in a journal. I am extremely honored to be a recipient of this prize, particularly because it comes from the biggest community of historians in the US. It’s a great feeling to be recognized by your peers and mentors!

Tell us about your award-winning article, “Community Control and Desegregation in East Palo Alto, California, 1958-1986.”

In my article, I analyze the history of Ravenswood High School, a defunct public high school in East Palo Alto, California. Due to discriminatory housing practices in the South Bay after World War II, East Palo Alto became one of the only areas where African Americans could live south of San Francisco. Ravenswood opened in 1958, and it was the only majority-Black school in an otherwise predominantly white school district that spanned several cities. Because of this demographic difference, concerns grew that Ravenswood would become a segregated school. While school desegregation was largely seen as the key to undoing the economic and social damages of residential segregation in the 1950s and 1960s, many people who lived in the Ravenswood school district opposed efforts to desegregate Ravenswood. Desegregation would have required Ravenswood students to be bused to other high schools in the district, and residents wanted to maintain their school’s Black identity while improving the quality of its education. This was also a period of time when many people were organizing in Black liberationist movements, and East Palo Alto had activists like Gertrude Wilks, who opened the independent Nairobi Schools to provide a high-quality, Afrocentric education. Financial difficulties led to the closure of Ravenswood in 1976, against the protests of the community.

Ultimately, my research showed how Black community organizers did not see desegregation as the key to equal educational opportunity for their students; they invested in a proudly Black education that was unique to their demographic and geographic community.

What drew you to this topic and what did your process look like?

I grew up in Palo Alto, so I was curious to analyze the trends of racial and economic discrimination that shaped an era I’m extremely familiar with. I decided to write my thesis on Ravenswood in the fall of 2019, when I wrote my first prospectus. As a senior, I completed the honors thesis track in the history department, so I did an independent study with Professor Caitlin Rosenthal in the fall and a 101 class with Professor Bernadette Perez in thespring. The COVID pandemic complicated the research process, but I was able to gather a variety of sources for my work, including newspaper articles, case documents, yearbooks, state and county documents, Congressional records, and others. I also talked to many members of the community, who had unique insights into what this time period was like.

How did your experience as a Berkeley student prepare you for this experience?

My advisors, Bernadette Perez and Caitlin Rosenthal, gave me excellent feedback and guidance on my research and writing. Berkeley is, of course, a great research institution, and I found that my professors always provided me with fantastic instruction and support.

Are there any moments that stand out when you look back at writing this piece or researching for it?

I had the privilege of talking to a lot of former students, Ravenswood staff members, and community activists who shared their stories of the school and the city. There’s one story in particular that sticks out to me. A former teacher at Ravenswood reached out to me and, while we chatted on the phone, happened to mention that she had some school newspaper issues she could give me. It turns out, she was the former journalism advisor and had every issue of the student publication Harabi Gani, along with several yearbooks. These materials became a crucial resource for me, and I feel very lucky that I received access to them!

Do you have any advice for other undergraduate students who share similar interests in writing?

Talk to faculty, build a network of people to talk to about your work, and seek out feedback on your writing. I have benefited in tremendous ways from the guidance of my scholarly community. Your passion and commitment to your work will shine through even more if you identify people who can help you grow as a writer and researcher!

On a lighthearted note, how did it feel to become a Raymond J. Cunningham Prize recipient, and who did you tell first of your accomplishments?

I was so excited to receive the email, and the first person I told was my mom- she was equally excited!