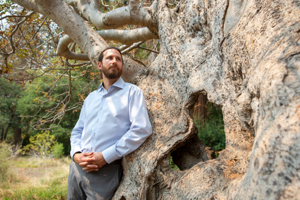 For Peter Nelson, stepping foot on the UC Berkeley campus last January as a new faculty member, after 3 1/2 years on the San Diego State University faculty, was a return to his alma mater, where he earned his master’s and doctoral degrees in anthropology.

Returning to Northern California from San Diego also was a homecoming, since Nelson is Coast Miwok and a tribal citizen of the Graton Rancheria community, a federation of the Coast Miwok and Southern Pomo peoples of Marin and southern Sonoma counties.

Berkeley’s proximity to his ancestral territory is a plus, said Nelson, a Santa Rosa resident who is the first and only hire, so far, for the campus’s new Native American and Indigenous Peoples cluster. “It’s a huge consideration for Native faculty,” he said, “trying to maintain connections with family, the ceremonial cycles, religious ties, food systems, and participation in traditional culture.”