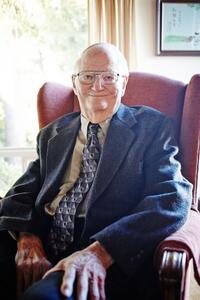 Frank F. Davis ‘55, UC Berkeley alumnus and inventor of a process used in the Pfizer and Moderna COVID-19 vaccines, died of pneumonia on May 19. He was 100.

Davis was born in 1920 in Pendleton, Oregon, and raised during the Great Depression. During his teenage years, he was often forced to rely on his wits to have enough to eat. At 19, he jumped at the chance to receive training in the experimental assembly department at Douglas Aircraft in California and went on to service fighter planes in North Africa, Europe, and the Middle East during World War II.

“He had a rare mind that saw possibility everywhere,” says Davis’s daughter, Ann. “He could tinker with ease, and just never seemed baffled by anything. He was a naturally innovative thinker.”

Davis was 27 years old when he started college as an undergraduate student at the University of Hawai’i after the war. Eager to learn more about chemistry and science, he chose to pursue his doctorate in biochemistry from the College of Letters & Science at UC Berkeley.

At the time, Berkeley’s Biological Sciences Division was known for its groundbreaking research in the field of nucleic acids. Ann recalls her father telling her and her brother Paul about the time he met James Watson and Francis Crick, who would later go on to win the Nobel Prize for their discovery of DNA structure. Davis was always proud of his time at Berkeley because it ‘gave him a top-flight education, and he felt it was the first time in his life that he was challenged at the right level.’

At Berkeley, Davis and his mentor, Dr. Frank Allen, discovered a previously unknown form of a nucleotide used in the cellular processing of nucleic acids. Following graduation and a postdoctoral fellowship, Davis accepted a teaching position at Rutgers University to continue nucleic acid research. In the late 1960s, his focus shifted to developing a way to use naturally occurring proteins as medicine, something previously not possible because of the body's immune reaction. Davis hit upon the idea of creating a chemical camouflage for injected proteins. He and his colleague Theo van Es found that coating proteins with polyethylene glycol (PEG) allowed them to evade the immune system and increase their effectiveness. This discovery has led to the development of over 20 FDA-approved drugs used to treat breast cancer, hepatitis C, and other diseases. Davis always credited his discovery to the education he received at UC Berkeley.

In 2013, Davis was honored by the Cal Alumni Association as an Alumnus of the Year, where he was recognized for his distinguished lifetime of achievement. He and his wife Kay also established the Frank F. Davis Endowed Fund for Graduate Fellowships in the Biological Sciences at UC Berkeley. According to Ann, her parents were keenly aware of the financial constraints that can confront graduate students and wanted to help them experience the same exciting opportunities that he found at Berkeley. To this day, the Frank F. Davis Endowed Fund continues to support generations of high-achieving graduate students in their academic pursuits.

Davis is survived by his two children: Ann and Paul (Robbie), grandchildren: Chantal, Jeremy, Kyle (Jenny), and Owen; and great-grandchildren: Gabriel and Sylvia.