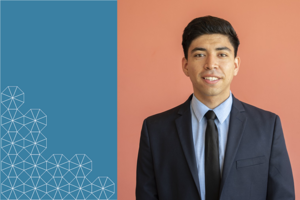 Alan Munoz is a recent UC Berkeley graduate with a BA in Political Economy. As an alumnus of the Fung Fellowship, having been a part of the program for two years, he shares what he’s been doing after graduation and how the fellowship shaped his professional interests in public health and design.

Hello, my name is Alan Munoz, and I am a recent graduate of the Political Economy program at UC Berkeley. I was raised in one of the oldest communities in Los Angeles, Boyle Heights—historically known as Paredon Blanco, a working-class neighborhood. Outside of school, I enjoy staying active through playing soccer with friends and the occasional night runs around Los Angeles.

At UC Berkeley, I had the opportunity to study in the Political Economy program which is inherently interdisciplinary; the core of the program focuses on the evolution of economics, technology, and society, meaning that students had to have a firm understanding of classical and contemporary ideas that have shaped the world we live in. This, with the flexibility of choosing your own concentration (my concentration was on technology & the Economy), was what really hooked me into the major.

I didn’t really give much thought to what exact career I wanted to pursue post-college; I simply took a ton of classes that I was interested in but never really took the time to home in on a specific job or career. It wasn’t until I began taking more upper division level courses that I began to think that I wanted to work in a career where I can do research. Danny Yagan’s “Public Economics” and Marco Gonzalez-Navarro’s “Economic Development” courses exposed me to many of the issues that are incurred by people and countries derived from the current inequality phenomenon we are experiencing.

Read more about Alan and other Fung Fellows >

The Fung Fellowship at UC Berkeley is shaping the next generation of health, conservation, and technology leaders for a better world.