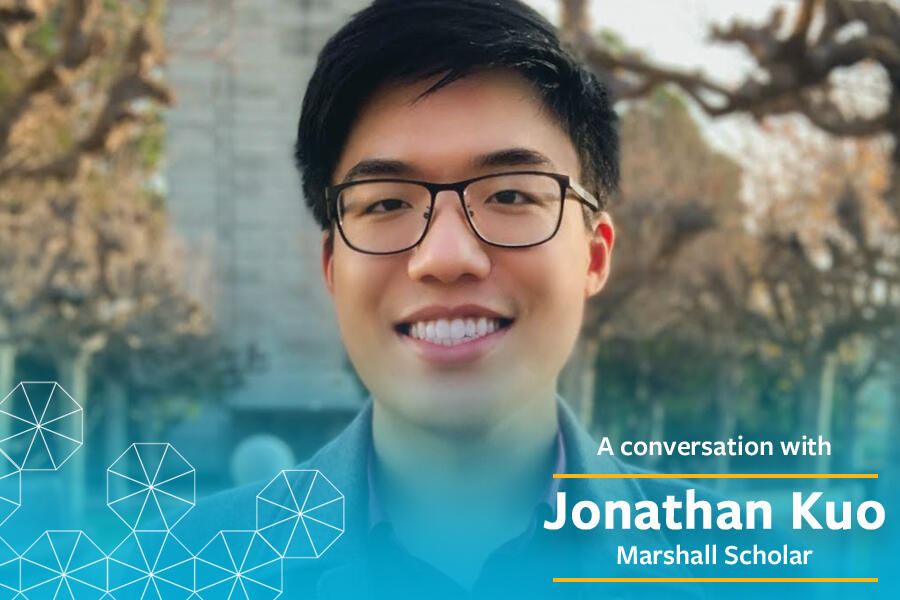 UC Berkeley undergraduate Jonathan Kuo was recently named as a 2022 recipient of the Marshall Scholarship. Created after World War II by the Parliament of the United Kingdom, this prestigious scholarship selects and finances distinguished American students to pursue graduate studies and careers at any university in the U.K.. On track to graduate with a B.A. in Rhetoric & Molecular and Cell Biology this Spring (Class of 2022), Jonathan exemplifies what it means to be a Golden Bear, as well as  the incredible diversity of Letters and Science and the University as a whole.

On January 30, 2022, we were able to have a discussion with Jonathan and learn more about his time at Berkeley, his research in the history of medicine, his plans for the future, and the ways his studies have impacted him personally.

Here are some highlights from our conversation, lightly edited for content and clarity.

As a senior, Jonathan Kuo’s time at UC Berkeley is approaching its end. During his time here, Jonathan has built an undergraduate resume marked by valuable research, leadership in campus organizations, and a story worthy of one of the most prestigious scholarships available to American students. Still, Jonathan was surprised when, only three days after his interview in November, he was informed that he had been chosen  as a recipient of the Marshall Scholarship.

“It was just so unbelievable… I had never seriously considered doing anything like studying abroad at college at all. I've been trying to figure out how I can keep doing research in the history of medicine. I saw this program and applied. It wasn't like something I had…planned for. I wasn't really expecting to get it.”

Being a 2022 Marshall Scholar, Jonathan is able to pick any university in the United Kingdom to enroll in for graduate studies. As of now, he has landed upon the University of Manchester. Having done undergraduate research in the history of medicine, the university’s Centre for the History of Science, Technology and Medicine was a draw for Jonathan. It’s a field which has marked much of Jonathan’s undergraduate career, and as he explains, part of a journey which began his freshman year.

“So that was spring of my freshman year. There was this project. It was called communicating vaccine preventable risks. It was posted by a professor in the School of Journalism, Elena Conis … She has training as both a journalist and a historian of medicine. So she teaches classes in the ‘J’ school (School of Journalism), but she does other research… That original project was going to be surveying state laws related to vaccination and specifically the personal belief exemption to vaccination.”

Kuo further explored these research interests in his honors thesis, which was sponsored by the Summer Undergraduate Research Fellowship (SURF)  program in 2021. This project would ultimately develop into research published in April of 2021 titled, “Historical Origins of the Personal Belief Exemption to Vaccination Mandates: The View from California,” on which Jonathan is credited as a co-author.

Coming into Berkeley originally intending to do research in the STEM fields, Dr. Conis’ connection to the school of journalism drew the attention of Kuo. The topic itself also struck a personal chord with Jonathan, as he explains that vaccination exemptions and skepticism had been a very personal aspect of his childhood.

“I was born premature and had a lot of developmental issues when I was growing up. My mom told me there was a year where I just didn't talk, and she kind of ascribed those problems to me getting vaccinated when I was young. So my parents and my mom especially had some skepticism toward vaccination. So for me it was interesting to see that there was research being done (around) actually solving this type of concern. I had done some science research in high school and I was somewhat familiar with what  biology lab research could study.”

Jonathan was familiar with laboratory research, but in this project he found a personal significance in the study of the social impact of science and medicine. This idea would be one he would develop during his time at the Berkeley Scientific Journal, of which he would eventually become editor-in-chief. The Berkeley Scientific Journal (BSJ), UC Berkeley’s premier undergraduate science journal, was one of several organizations Kuo would participate in and lead, alongside being co-president of California Health Professional Student Alliance (CaHPSA) at Berkeley.

“My approach towards science communication sort of changed over the years. I entered the Berkeley Scientific Journal thinking that science communication was only about trying to make science more easily understandable, right? Because there's a lot of research papers out there, a lot of material being produced by scientists that is very dense, very verbose, very hard to understand.

What's important about science journalism is telling a story and showing how things are connected beyond just the scientific work being undertaken. And I think that sort of knowledge is just as important as being able to explain scientific results clearly.”

Scientific research and communication are obviously fields of much significance to Kuo, and one that led him to choose his two majors: Rhetoric and Molecular and Cell Biology; two fields which, at first glance, may not seem to provide a clear connection. Jonathan’s desire to make scientific research more accessible has helped him to develop a great appreciation for the connection between science and the humanities. Kuo’s journey in the field of rhetoric specifically is also one of personal significance, and again one that began in his freshman year:

“I came out as gay the summer before college started. First of my friends. I was pretty much out at Berkeley... The experience of coming out as gay– that in itself is like a different way of seeing the world. And rhetoric taught me that there were many different ways to see the world”

Jonathan credits his first Rhetoric class, Rhetoric R1A, for opening his eyes to this realization. It was a class which he hadn’t intended on taking, and which would complement his future endeavours in the history of medicine.

When asked if he had any advice for future or aspiring students, Jonathan stressed the importance of exploring classes and research outside of one’s field. He notes how such exploring led to his current career path, and other unexpected opportunities for growth. One such example came through English 134:

“I think one thing that struck me about that class was that it was the first time I had read a work of Asian-American literature. The first book we read was called I Hotels by Karen Tei Yamashita about advocacy efforts related to the I Hotel in San Francisco and Asian-American activism in the San Francisco Bay Area. And that was really interesting because you don't really get taught Asian-American history in school, at least not in a positive light.. you hear about Chinese migrant workers during the gold rush era… Japanese internment camps… there’s sort of no positive.”

Jonathan Kuo exemplifies the essence of what it means to be a Letters & Science student. Understanding not only the significance of one field, but how many can come together to complement each other. Kuo’s inspirational love for learning is one that his fellow Golden Bears may appreciate and is plainly expressed in his many accomplishments. We wish him luck on his future endeavors and again congratulate Jonathan Kuo on all he has achieved!