On the evening of March 16, 2021, a man opened fire in three Atlanta-area businesses and killed eight people, six of whom were of Asian descent. In response to those tragic shootings, “#StopAsianHate” and “#AsiansAreHumansToo” became all too familiar refrains as thousands across the country protested the rising tide of anti-Asian bias and violence. Gene Luen Yang, a renowned cartoonist, turned to his pen and paper and used the medium of comics to channel his own thoughts and emotions. 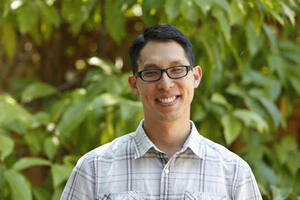 Yang is a graduate of UC Berkeley, where he majored in computer science while minoring in L&S’s creative writing program. Early in his career, he leveraged both skill sets as an educator and has since become a prolific storyteller, successfully partnering with iconic comic book publishers DC Comics and Marvel Comics. Yang, who is Chinese American, is a two-time National Book Award finalist with graphic novels that deftly weave topics spanning from religion and culture in Boxers & Saints, to identity and stereotypes in American Born Chinese. In 2016, he received a MacArthur genius grant, and the Library of Congress named him as its Ambassador for Young People’s Literature.

We spoke with Yang about his path to becoming a cartoonist, the “#AsiansAreHumanToo” comic he recently posted on Instagram, and how art and storytelling can help us unpack complex themes like identity, racism, and social justice.

[This interview has been lightly edited for length and clarity.]

L&S: As a student at Berkeley, what was it like pursuing such seemingly dissimilar disciplines, computer science and creative writing? How do these different skill sets show up in your work?

Gene Yang: When I started at Berkeley, I went in wanting to double major in computer science and art. But after taking a few art classes, I realized that wasn’t where I belonged and I switched to a minor in creative writing. I was lucky, because it was hard to get into those classes at the time. I was waitlisted and finally got in after an interview with Professor Thaisa Frank. After being in comic books and graphic novels for over 20 years, the minor in creative writing turned out to be much more useful to me in adulthood.

When it comes to coding and writing, I actually see a lot of overlap between the two. For both, you’re taking abstract ideas in your head and breaking them out into concrete pieces. And then you’re laying out these concrete pieces in sequential order. The only difference is that with coding, it’s a set of instructions and with comics, it’s a set of panels.

L&S: Your recent Instagram comic seemed to appear almost immediately in the aftermath of the Atlanta shootings, generating nearly 19,000 likes. What was that process like for you? 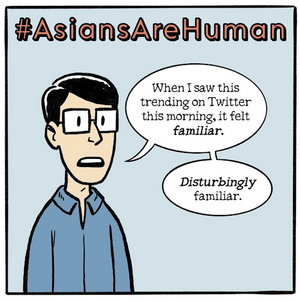 I heard about the shooting from a friend and like many others, I couldn’t sleep that night. I woke up in the morning and set aside everything I had to do that day. I just couldn’t concentrate on anything else. I remember I had a deadline for DC Comics and just couldn’t get to that until I got this out.

I think that moment in particular, the shootings, was a turning point for Asian Americans. I remember having a conversation with many college friends, from Cal actually, who have been involved with social justice issues for a long time. We talked about how we knew something bad was going on with Asian Americans since the beginning of the pandemic, but there was something that did not allow us to take it seriously until the shootings happened. Then, something finally snapped into place.

Your work is often grounded in themes of identity, touching on topics like racism, stereotypes, and self-acceptance. Was it your intention to create art to make change?

The comics I did during the first ten years of my career felt a bit like an exorcism. With American Born Chinese, I was just thinking about how I could deal with my demons on a comic page. I was never expecting to make a full-time living with comics. In fact, I originally published Chinese as xeroxed comics. I would finish a chapter, copy it, take it to local shows and then sell the copies. There was also a shop on Shattuck Avenue (in Berkeley) called Comic Relief that would let me sell comics on consignment. Creating the comics was just my way of working through things.

What is it about the format of comics and graphic novels that enables you to process such deep ideas and feelings?

For me, with issues of race, there’s an extra “oomph” when you deal in comics as opposed to text, because of the visual element. So many of the ideas that haunt us, as minorities, are expressed visually - in political cartoons, in movies, etc. Because comics are a visual format, I felt like I could deal with that more directly. In American Born Chinese, there’s a character called Cousin Chin-Kee who is essentially an embodiment of all the ideas I found in my head, that I had imbibed from the culture around me. I just don’t think I could have dealt with those ideas in the same way if I was limited to only words. I needed the pictures.

In your “#AsiansAreHumanToo” comic, there is a panel where your avatar falls silent and there are no words at all. How do you decide when to lean on words versus pictures?

I think that silent panels with comics are a uniquely powerful way of expressing yourself within the medium. Comics are an inherently hybrid medium, a combination of still illustrations and words. But I think the way that pictures and words deal with information and emotion are very different. For emotion, when you try to illustrate an emotion through pictures, it’s much more visceral, it feels much more raw. Whereas, when you do it through words, it's generally much more nuanced. So when there’s an emotion that I want to put directly into a reader’s gut, bypassing their brain, I do it through pictures. When I want something more nuanced, more thoughtful, I’ll do it through words. And comics give you both of those things to work with.

Comics give you both of those things to work with. For issues of identity specifically, both of those things are in play - sometimes we feel these issues viscerally in our gut, before we’re even aware of why we feel them. And other times, it’s just the thing you roll over in your head at night, when you’re alone in the darkness.

Many Asian American creatives, authors, artists, and musicians, have spoken out in support of each other following the tragic events of this year. Have you sensed that within your own community?

Yes, there has been a lot of solidarity between Asian American creatives in both books and also in comics. I’ve seen it in both communities. In fact, there’s a great book coming out soon by an author named Paula Yoo, From a Whisper to a Rallying Cry, The Killing of Vincent Chin and the Trial that Galvanized the Asian American Movement. Virtually every Asian American, especially if you went to UC Berkeley, has heard of Vincent Chin. We know that’s a flashpoint in our history, but most of us don’t know a lot of the details. With that particular book, I had been planning to read it over a week and instead I finished it in 12 hours. It was like I was getting to know a long-lost relative. This incident that I knew was important to me--part of my history--I’d really only known through echoes. Through her book, I felt like I was getting an up-close look.

What do you think the future holds for the Asian American community? How might these events shape your work moving forward?

That feeling I talk about in the earlier strip is real. Within my career, every now and then, things don’t feel as fraught as they used to, and I start to move on. I look at my four kids and their experiences are so different from mine, and I think we’re moving in a good direction. When my kids read American Born Chinese, it’s just a story to them. I don’t think they have the same voices in their head that I do, because they grew up very differently from me.

But then something will happen, and I realize we can’t move on. I don’t know if we’ll ever be able to move on. Everything that’s happened since the pandemic has definitely changed the tenor of our conversations. These events are affirmations that I have to keep telling stories about these same things.