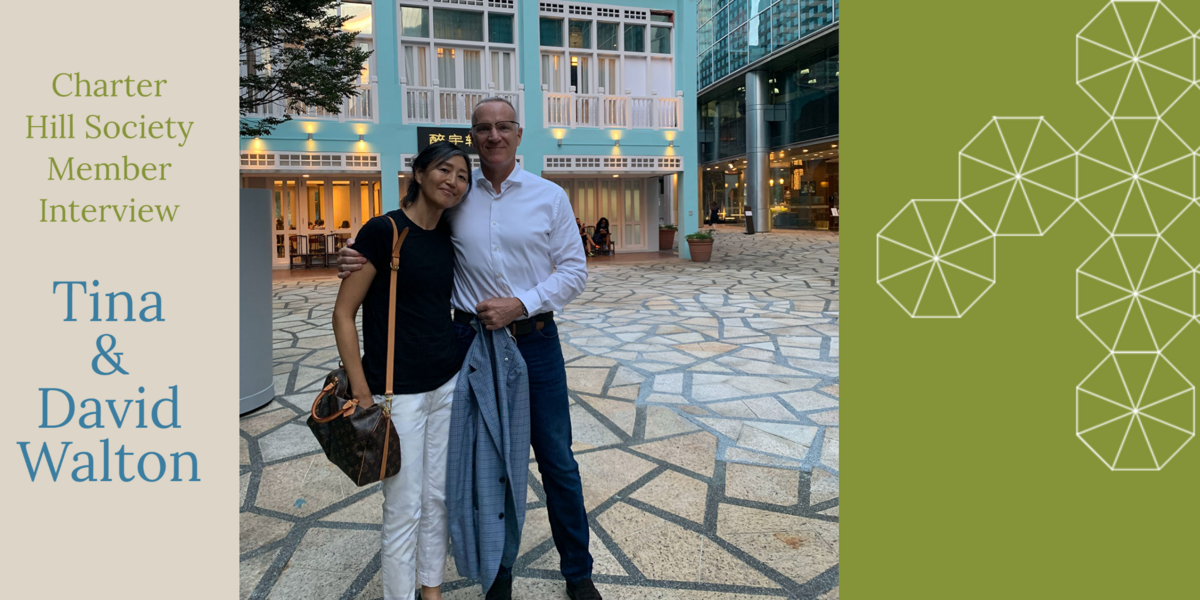 Tina (‘91, East Asian Languages and Economics) and David Walton (‘86, JD in Law) both graduated from UC Berkeley, though they only first met after their graduation, when they were both living in Seattle. Their marriage led them first to Hong Kong, and eventually to their permanent home in Singapore. There, David is the Deputy Managing Director and Chief Operating Officer for BOC Aviation and Tina is a published author. Her young adult novel Last Days of the Morning Calm and her short story in the Anthology A Book of Hugs, Stories to Keep you Company, are available through Tina’s website). David and Tina joined the Charter Hill Society to bring Cal programming to fellow Cal Bears in Singapore and strengthen the local community there. As honorary chairs, they recently made their gift to Fiat Lux Scholarships in order to support students who may otherwise not be able to afford the cost of tuition. “We both would like to play some small part in helping others get through Berkeley free from the pressure that student debt will inevitably create.”

How did your journey at Berkeley lead you to Singapore?

Tina: I had a wonderful undergraduate experience at Berkeley that included studying abroad. Through the Education Abroad Program (EAP), I was able to spend a year studying Japanese as an exchange student. As a Korean-American, I wanted to understand a culture that had played a huge part in my own personal history as my grandparents had grown up under colonial Korea, and the EAP program allowed me this opportunity. After graduation, I was inspired by professor Barry Eichengreen’s macroeconomic classes and applied for an internship at the Federal Reserve Board. It was an amazing two years of professional growth and shortly after I enrolled in a Ph.D. program in Economics at the University of Washington. As a graduate student in Seattle, I met David and we married shortly thereafter. Our shared history since has led us to Singapore.

David: We first met in Seattle, and we found out immediately that we had a lot in common, beyond just our Berkeley degrees. I’d recently returned from a year living in Tokyo while working on secondment to the Long-Term Credit Bank of Japan. My dream was to move to Hong Kong to help open up a branch office for the law firm where I was a partner, and fortunately, Tina agreed to join in on the adventure. We married in December 1994 and six months later moved to Hong Kong. We traveled extensively in Asia and first fell in love with Singapore during that time. Although our stay in Hong Kong only lasted a couple of years, we continued our interest in and travels to Asia. Eventually, in 2014, we were offered an opportunity to live in Singapore when I was offered a new job with a Singapore-based aircraft leasing company, BOC Aviation, that had been my client some 20 years earlier when I was practicing law in Hong Kong. It’s a testament to the friendships and relationships that you build over the years – my advice is to be intentional about staying in touch with friends and colleagues. It’s personally enriching, and it may lead to interesting paths in the future.

Tina, you received your degrees in East Asian Languages and Economics, followed by a Master’s in Creative Writing. How have these passions played out in your life and how do you see them connected? What inspired you to become a children’s book author?

Tina: I’ve always been drawn to research, whether it’s looking at past earnings and data on companies or countries to explain current phenomena or predict future behavior. However, I dropped out of the paid workforce to raise children. At the time, I spent a lot of time reading to my children and realized there weren’t very many books regarding Asian history in children’s literature. I began to learn about certain segments of Korean history and this led me to want to share my findings with young people. Through historical fiction, I hope young people will get a flavor for a different culture and history that can perhaps help them make sense of how things are today and find hope for tomorrow.

Join The Charter Hill Society for the Social Sciences!

Your support ensures that Berkeley students and faculty continue to do their best work, supporting cutting-edge research and teaching. 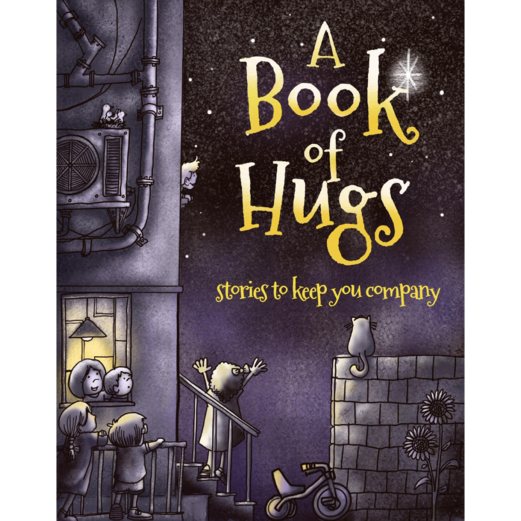 Tina's story "Short and Sweet" appears in the anthologyA Book of Hugs, Stories to Keep you Company, published in 2020. 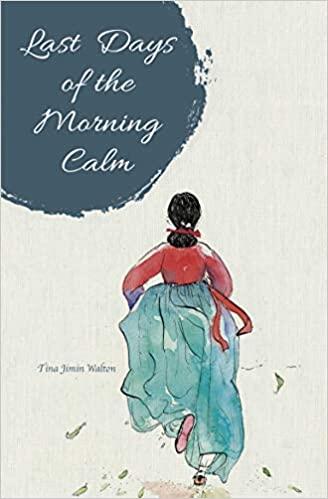 Last Days of the Morning Calm. By Tina Walton

You have made a generous gift in support of the Fiat Lux Scholarship. What inspired you to give back to Berkeley?

Tina and David: We both have a heart for those students whose families are not in a position to help them with tuition and other expenses. David worked part-time during college and law school and still graduated from Boalt Hall with a heavy debt burden. We both would like to play some small part in helping others get through Berkeley free from the pressure that student debt will inevitably create. The fact that the Fiat Lux Scholarship helps first-generation college students really appeals to us. If you ever need inspiration, we recommend that you learn more about the students who are Fiat Lux scholars at Berkeley. These students are truly incredible! 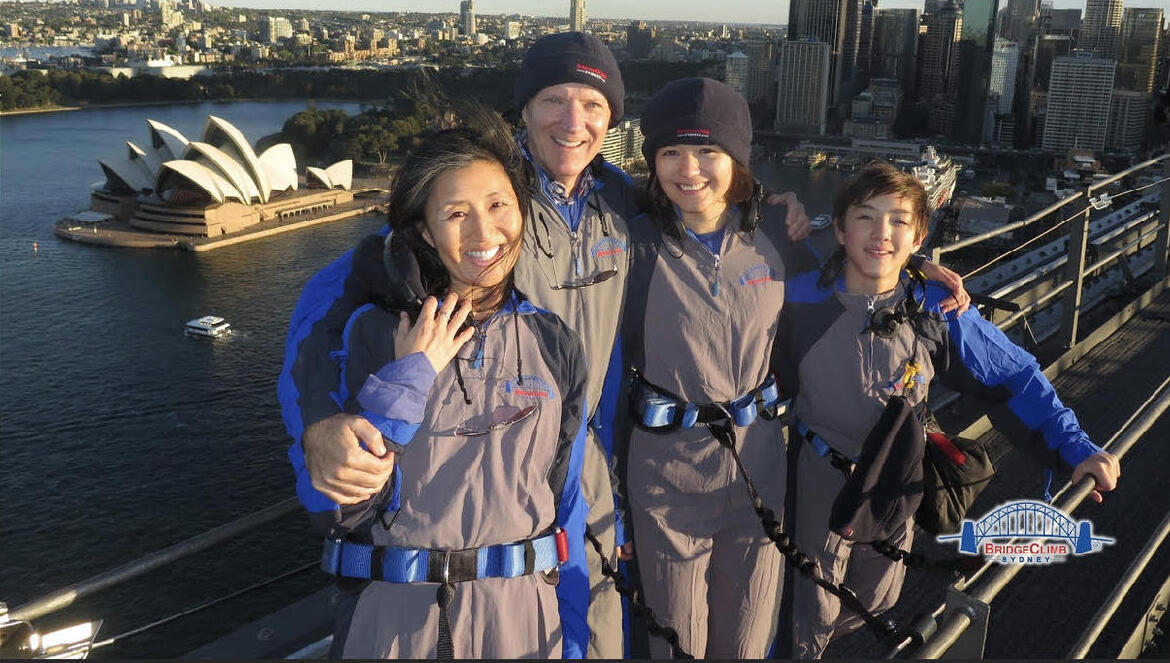 The Walton Family in Sydney, Australia

How has the Berkeley experience shaped your personal and professional trajectory? What are your fondest memories from your time here?

David: In terms of my personal trajectory, living in Berkeley changed my perspective on social justice and politics. I grew up in a homogenous, working-class suburb of Seattle, and the cultural/political spectrum was pretty narrow. During my time in Berkeley, the anti-Apartheid and divestment protests were very active on campus. I personally saw police clear the front of Sproul Hall, or Steve Biko Hall as the students renamed it, and I was shocked and outraged. While I don’t claim to have been an active participant, observing what transpired really changed my views on protest and on police response to peaceful protest. It also was an important stepping stone on my journey to try to figure out what constitutes social justice in our nation. Berkeley, and Boalt Hall in particular, played a pivotal role in my professional journey as I developed the skills that prepared me for the early days of my career and set me on the path that led me to Singapore today.

How has your experience been living in Singapore during the Coronavirus pandemic? How has your family coped with the distance?

Tina and David: There are few silver linings in the COVID pandemic, but we suppose Singapore is one of the best places to have been. The government has generally done a very good job, and the population has followed guidance – mask-wearing, limiting gatherings, staying home during the first weeks of “circuit breaker.” We are blessed to have relatively few cases here and very few COVID deaths. However, travel restrictions have kept us grounded on this relatively small island and kept us from seeing our daughters, who are in California doing their undergraduate study. Zoom is good as far as it goes, but we could really use some hugs. 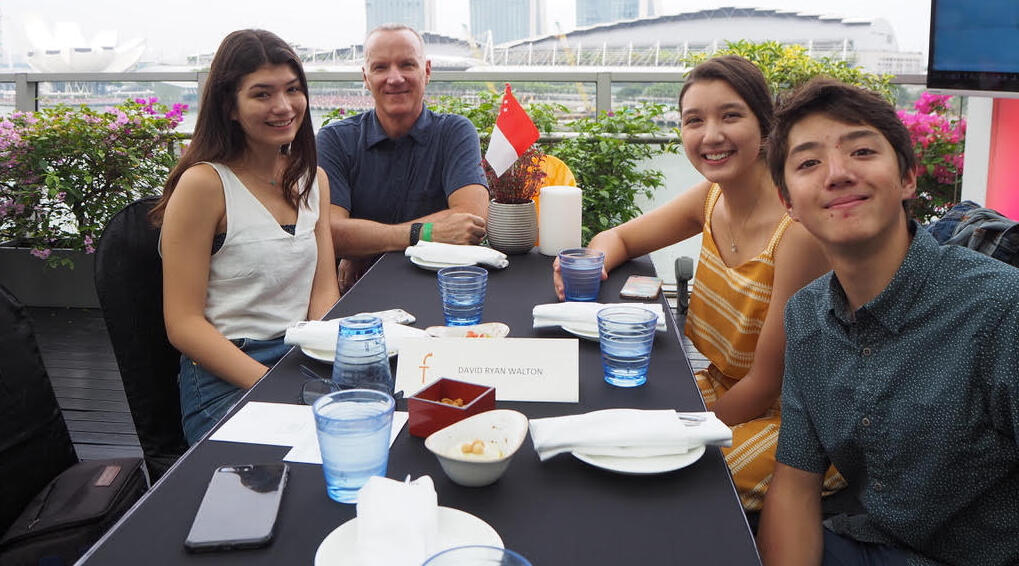 The Walton family in Singapore.

David, how has your role and the aircraft industry changed throughout COVID? How do you see the future of the industry?

David: COVID brought employee health and safety to the forefront for everyone I know who is involved in corporate leadership. We had to start by figuring out how best to protect our employees while maintaining business continuity for the sake of all of our stakeholders. That came with an understanding first of the health recommendations and secondly making immediate investments in information technology systems to enable our team to collaborate, get the work done, and look after one another, all remotely. We were very fortunate in that we had no outbreaks in any of our office locations.

We also had to work out ways to support our airline customers when they had severe constraints on their liquidity from grounded aircraft and lost revenue, and to find solutions with our business partners in the manufacturing industry who had production problems caused by government lock-downs and supply chain disruptions. We had to be agile and creative, and I’m really proud of what our team accomplished during 2020.
Now we look ahead to recovery, but I think this “hard reset” has given all of us a chance to evaluate how to do things better going forward. For instance, the reduction in passenger demand led to reductions in airline capacity, which drove the retirement of nearly 1,000 aircraft so far – all inefficient, older aircraft. We can rebuild now with the latest technology, fuel-efficient fleets. Having proven we can operate remotely, there will be more confidence in using virtual meetings to reduce the need for business travel going forward – helping reduce our carbon footprint. There will always be a need, in my opinion, for face-to-face meetings, but we can have fewer meetings and travel on more efficient aircraft. We said earlier that there are few silver linings from COVID, but this may be one of them – the experience will accelerate our push to reduce the carbon impact of our industry.