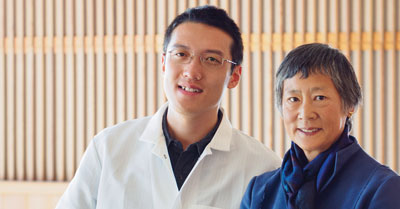 There is perhaps no greater opportunity for impact in higher education than funding graduate student fellowships, which help to support the next generation of research and scholarship. Originally created as the Chancellor’s Discretionary Fund in 1990, the Tang Opportunity Fund has provided critical support for several outstanding MCB PhD students from China. Jack C. Tang had been a great admirer of former Chancellor Chang-Lin Tien, and both of his daughters — Leslie and Nadine Tang — had graduated from Cal. They learned from the Department of Molecular and Cell Biology that, while some of the best graduate student applicants came from China, their tuition and fees cost the department twice as much to support as in-state students.

The fellowship is offered annually and covers costs like tuition, lab expenses, health insurance, and a living stipend. But the Tangs’ connection to their fellows goes beyond financial support — they maintain a close, familial relationship, helping to network and create a sense of community.

The fellowship is currently held by Zichong Li who is working toward his PhD in 2018 in Qiang Zhou's lab. Li has identified four human proteins that can potentially be manipulated to clear the HIV virus from the body. The resulting drugs may revolutionize the cost of HIV therapies, which will be particularly crucial in countries like China and Africa.

Without the support of the Tang Family Fellowship, Li says, “It would be very hard for me to focus on my research, if I had to get a part-time job. But besides the material support, it’s just a great honor. I feel like I’m in a big family.”

The feeling is mutual. “I feel so grateful to know people like Zichong,” says Nadine Tang. “He works incredibly hard and really wants to change the world. You don’t get to where he has without a lot of sacrifice.”

Help support the next generation of leaders! Contact Kirsten Swan, Senior Director of Development, via email, or at (510) 643-2228.